THD EVOLUTION - The Doppler system for transanal hemorrhoidal dearterialization is an electronic device consisting of an integrated highly sensitive, digital continuous Doppler module and a light source that, together with the THD Basic Plus or THD Slide One instrument, allows proximal ligation of the end branches of the upper rectus artery under control Doppler probe. The device is equipped with a light source, pneumatic pedal and power cable.

This equipment also has a headphone jack and a wide screen, so that operations can be carried out conveniently and quickly.

THD Basic Plus is a specially designed device for direct use in the Doppler system for the transanal hemorrhoidal dearterialization of THD EVOLUTION. 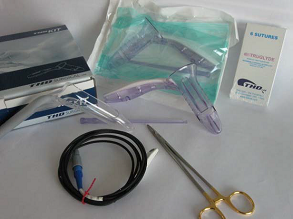 THD Basic Plus is a specially designed anoscope for improving the THD procedure by treating hemorrhoids. The special form of the instrument allows you to perform dressings and reduce prolapse using a sterile THD SURGY MAXI anoscope, as well as reduce patient suffering and reduce the time of surgery. The THD Basic Plus device is made of transparent medical plastic.

Due to this, and also when using fiber-optic lighting through a tip of a certain shape, optimal illumination of the surgical site is ensured. 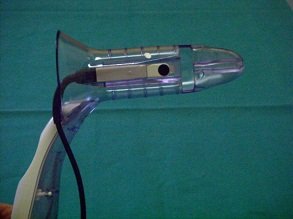